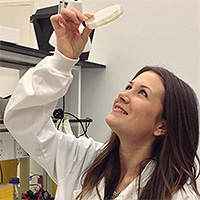 My first degree was in Applied Biology BSc (Hons) at Northumbria University, where I worked on antibiotic biosynthesis by various species of Actinomycete bacteria.
I am broadly interested in bacterial cell biology and how bacteria have developed mechanisms to survive stressful conditions. Specifically, I am interested in the bacterial stringent response and how this can lead to bacterial persistence and multi-drug tolerance.

Persistent bacteria are non-growing cells that possess multidrug tolerance due to their dormant state and pose a serious health threat due to the ability to survive antibiotic treatment. Almost all bacteria are able to form persistent cells including many pathogenic species. Type II toxin-antitoxin (TA) loci encoding both a toxic protein, that down regulate cellular processes such as translation, replication or cell wall synthesis and an antitoxin that binds strongly to and inactivates the toxin. It recently has been shown that over production of toxins induce a persistent state multi drug tolerant state.
The molecular mechanism of persister formation is due to the activation of  toxins encoded by TA genes but is not yet fully understood, therefore, using the E. coli relBE genes as a model, my project aims to further investigate persister formation focusing particularly on uncovering the molecular mechanism by which the toxin in the TA complex is activated.

Persistent bacteria are heavily implicated with recurrent infections due to the ineffective nature of antibiotic treatment on dormant cells. Understanding the molecular mechanism behind persistence may in future offer ways to inhibit persister formation, thus allowing more effective treatment by antibiotics.